Many of us have been using the Google suite of products for MANY years, first starting with their takeover of search by just having a simple search bar. Back in the old days of Altavista, Yahoo, AskJeeves to name but a few, the home page of many search engines was their portal, populated with all sorts of content. Google changed this with a clean simple search bar.

They then introduced GMAIL which was an invitation only online web mail account which gave you a massive 200Mb of storage and then 1Gb of storage (unheard of at the time). Then things got pervasive with Google Docs, Google Plus and the release of Android. Of course along the way they picked up Youtube and introduced Google Maps and Google Photos, as well as releasing Google Chrome as their browser to combat Microsoft's explorer who were looking at getting into search with Bing.

Well now 10-15 years later, Google is EVERYWHERE and they make a mockery, at least in my opinion, of their original mission of "DO NO EVIL". When you have Eric Schmidt attending Bildeberg, advising the Clinton Campaign (and attending her missed election victory party with a STAFF badge), 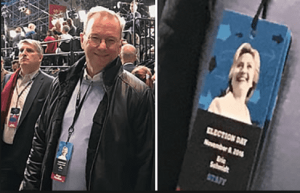 as well as sitting on Defence think tanks, the question has to be asked, how much does google know about you, what are they doing with the information and how much is being passed on or sold. (let me tell you its a LOT).

However, what can we do about it when we are so entrenched. After all there is probably a "generation" of users who only know Google and their products and apart from Facebook didn't know there were options out there. After all we don't say we are going to search for something on the internet, we say we are going to google it. When the company becomes a verb then pervasiveness is apparent.

So just so you know, THERE ARE OPTIONS.

Here is a list of products that Google provide along with third party "non evil" alternatives.